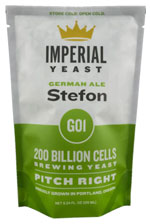 Gary Batliner joined the Imperial Organic Yeast team in 2018 and initially worked in the shipping department. After a stint packing and shipping yeast for customers all over the world, he moved to a production role, where he is now responsible for growing yeast and cellar work. Gary is a vital part of the team and contributes hard work, a positive attitude and an excellent Hefeweizen.

"I love a good German hefeweizen and was always on the lookout for one on tap," Gary says. "I grew frustrated because beer at the grocery store isn't always the freshest, and most pubs at the time had five IPAs, a pale ale, and a stout on tap and hardly ever a hefeweizen. Tired of being disappointed, I decided I would take up brewing and always have fresh hefeweizen available for myself.

"I have changed and adapted this recipe many times over the years, making subtle changes along the way. I started adding a little rye malt because I thought it would play nicely with the clove notes that German hefeweizen is famous for having, which is where the ferulic acid rest comes into play. I want my hefeweizen to be more clove and less banana, and I think my current recipe strikes a nice balance between the two.

"I started using the munich red wheat because I thought it brought a nice bread flavor to the palate and resulted in a delicious balance of all the characters at play."